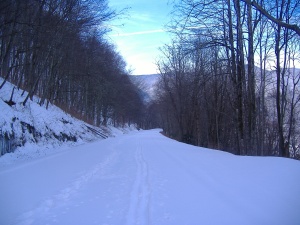 In 2005, on a cold, grey (and broadleaf-less) winter day in the Northeast, I posed an e-question to Dr. Frances Kuo, one of North America’s leading experts on landscape and human health. Dr. Kuo and her team had recently published the second of their studies on the positive links between green (vegetation-rich) play areas and ADHD symptom reduction in children. Given the overlap between ADHD and seasonal affective disorder (SAD), and the seasonal symptoms of ADHD – e.g. prescriptions for ADHD medications among youth are close to 30% lower in spring/summer months – I asked Dr. Kuo if the loss of green during the winter months might at least make a contribution to the so-called winter blues. My own vantage point, as I typed the e-mail that day, was a window view to red brick and leafless trees – the red bricks in that view would be obscured and transformed to lush green when the broadleaf trees burst a month or two later. The obvious connections between sunlight and serotonin, winter loss of vitamin D and its influence on mood notwithstanding, could our ‘green withdrawal’ add to those known variables and drag us down just a bit more? Dr. Kuo graciously responded that her team had not investigated the seasonal aspects of green in relation to ADHD/SAD, but that my speculation made sense.

Since that 2005 exchange, the research on the beneficial effects of ‘green’ has grown leaps and bounds. Studies have validated the mood and cognitive benefits of spending time in nature – forests, arboretums, gardens, etc – objective measurements in the area of stress physiology and brain imaging have provided solid support to the subjective reports of nature’s benefits. Although there are many factors that could be responsible for nature’s health benefits (e.g. phytoncides secreted from trees have a positive effect on immune support) researchers have turned their attention to the color green itself. In a new study published in Environmental Science and Technology, a team from the University of Essex examined the way in which visual color influenced mood and perceived exertion during exercise. Specifically, they had healthy young adults (average age 20) exercise on a stationary bike while watching a large screen video of a cycle road ride through green-foliage-rich Shenandoah National Park. The “green” exercise condition was cycling while watching the unedited video, while in the “grey” and “red” condition the same video was digitally filtered to appear achromatic (grey) or slightly red (and obviously less green). Brightness, contrast and sharpness were uniform in all conditions. Perceived exertion was lower in the “green” exercise group, while the “red” group had higher scores of total mood disturbance and anger. Less perceived exertion with exercise is a key factor in desire to return for another bout of exercise or to continue on for a bit more. Motivation is at the very heart of transforming a sedentary to an active lifestyle. A separate 2012 study in Personality and Social Psychology Bulletin has also shown that green facilitates creative performance, likely by influencing motivation. Green, it seems, really does mean go.

Of course, the National Park Service reports that Shenandoah National Park is dominated by trees that are leafless in the winter. Therefore the scene that influenced mood and perception of physical exertion among cyclists would be very different during the winter months – one might say it would look a tad grey. And the question remains, how does this fit into our winter moods? In 2012 Dutch scientists reported that living in urban greyspace may be a motivating factor, at least for those that can afford it, to spend more holiday nights away from home. Although only a small percentage of those living in northern US states and Canada experience diagnosable SAD, approximately 1 out of 2 adults report a marked change in mood or energy during the winter months. Leafless trees and winter-browned grass are typically not the aesthetic gold standard, and given the bulk of research on community greenness and health, is it time to closely examine the seasonality of benefit?

Dr. Alan C. Logan is a naturopathic doctor, scientist, and independent researcher focusing on nutritional medicine and ecotherapy. He is currently invited faculty in the mind-body medicine courses in Harvard’s School of Continuing Medical Education. He is the co-author of the recently published book Your Brain on Nature, and author of The Brain Diet.

2 thoughts on “Does ‘green withdrawal’ influence our winter blues?”