By all accounts, the weather for most of this winter has been unusually lousy all up and down the East Coast. As the Washington Post’s weather team explains it, an amplified jet stream pattern has created a “sliding board of significant cold air deliveries,” not to mention broken chunks of the polar vortex barreling down from Hudson Bay. Translation: Brrr. 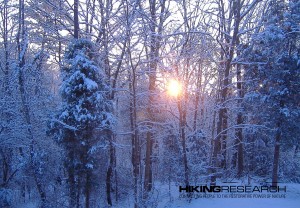 Yesterday morning was cold and gray in D.C., the temperature on my phone reading 28 degrees. On the streets and sidewalks, icy patches remained of the previous day’s sleet.

Still, I knew I should go for my regular walk along the C&O Canal. It’s mostly scenic, although to get there I have to cross a freeway. And in winter, with the leaves gone, that freeway sounds and looks closer to the canal once you’re on it. I knew my feet would be cold and the ground hard, potentially treacherous is spots. No doubt about it; walking in the dead of DC winter is kind of a drag.

I know what you’re expecting me to say, that once I was out there it wasn’t so bad and I had a rewarding experience communing with the ice crystals and the clouds and the bracing breeze. But I’m not going to say that, because the fact is I didn’t enjoy it very much.  On these cold days (and we’ve had a lot of them – January and February so far have been among Washington’s very coldest), it takes me a full 20 minutes of vigorous walking to stop being stiff with shivers. Even after that point, I still grumble. Oh man, it sucks out here. Sometimes the wind bites into my collar and the balls of my feet go numb. I’d rather be holding a hot cup of tea and wearing sheepskin slippers in the breeze of my heat duct.

Cross-country skiing is a great way to enjoy the solitude and beauty of nature in winter.
Photo by Mark Ellison

So why do I go? We all need a little sunshine, but this dark winter I haven’t even had that justification.  I go because of how I feel after. On these days, I like not the walking but the having walked.  I like the satisfaction of conquering my couch potato instincts, but more than that I tend to have a good day.  I can focus at work, my mood is even and I tend to sleep better.

Neuropsych research backs me up.  Marc Berman, now at the University of South Carolina, found that even when his research subjects walked through an arboretum in a Michigan winter, they performed better on cognitive tests than they had before the walk and better than subjects who walked through an urban setting.

We might not always crave spinach either, but that doesn’t mean we should only reach for pie. Regular walks in nature are usually pleasant, but even when they’re not, they’re “good for us.” Of course saying something is good for you is a sure way to make it a chore. How to avoid that? Other experts suggest keeping it fun, maybe by walking with friends or keeping your mind engaged. For me, knowing I’ll  sleep and work well is usually (but not always) motivation enough. For those other days, please pass the tea.

Florence Williams
Florence Williams is a contributing editor at Outside Magazine and a freelance writer for New York Times, New York Times Magazine, Slate, Mother Jones, High Country News, O-Oprah, W., Bicycling and numerous other publications. Her first book, BREASTS: A Natural and Unnatural History  (W.W. Norton 2012) received the Los Angeles Times Book Prize in science and technology and the 2013 Audie in general nonfiction. It was also named a notable book of 2012 by the New York Times.