A recent article in Scientific American explores new research that indicates living in cities has significant negative implications for the brain.  A research team led by Andreas Meyer-Lindenberg, a psychiatrist, mathematician, and director of the Central Institute of Mental Health in Mannheim, Germany (CIM) has found evidence that the strain of urban living engages specific stress circuits in the brain, which are also known to malfunction in mood disorders and other mental illnesses. 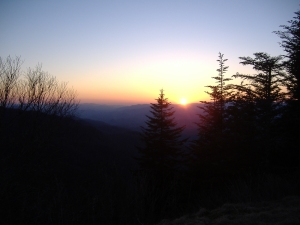 Sunset on the Blue Ridge Parkway in North Carolina. The Parkway is an escape from the stress of urban living for millions each year.
Photo by Mark Ellison

In 2011 CIM researchers recorded the brain activity of 32 German college students from  large cities, towns, and rural areas. Participants performed brainteasers and were intentionally stressed out while doing this. The result showed elevated heart rate, blood pressure and level of stress hormones in participants. The stress the students experienced activated many areas in the brain, including the amygdala, (a cherry-size structure within the temporal lobe which serves as a “danger sensor” prompting the “fight or flight” response) whose activity under pressure exactly matched participants home setting. The more urban a participants home environment, the more engaged their amygdala became. For those raised in rural areas, the amygdala seemed immune to stress, and it was only moderately active among those from small towns. For urban residents, stress kicked it into overdrive. The research was repeated with 70 additional participants, which confirmed the results of the initial study. It was intriguing that city residents could be identified by a brain scan which revealed hyperactivity in the amygdala. An hyperactive amygdala is also observed in patients suffering from depression and anxiety. The researchers noted that not all city dwellers are impacted by mood disorders, but that chronic overstimulation of this region of the brain does place some people at a higher risk. This may also have a link to violent behavior according to Meyer-Lindenberg. Violence is typically more of a problem in cities and some now believe violent behavior can be linked with overstimulation of the amygdala.

Researchers at CIM also sought to learn more about the increased risk for schizophrenia in people born and raised in cities. They found that the perigenual anterior cingulate cortex (pACC) had activity levels under stress that correlated with living in a city. (The pACC and the amygdala are closely linked with several studies showing that the pACC inhibits activity in the amygdala.) Subjects who spent the most time growing up in cities showed the highest levels of pACC activity under pressure. A damaged pACC, caused by chronic stimulation from growing up in a city might then fail to moderate an overactive amygdala in an urban adult. Data from CIM researchers reveals that the longer a person lives in a city, the less communication occurs between their amygdala and pACC.

CIM researchers continue to explore how brain stress occurs and why it causes psychiatric conditions, and then hope to develop interventions to make cities more livable. Meyer-Lindenberg suggests that a lack of green space, excessive noise and other environmental factors may contribute to pACC and amygdala dysfunction, and that cities need to be designed so that they promote emotional well-being, thus serving to prevent mental disorders, not just treat them.

The importance of nature in the urban environment is terribly undervalued. Just this past week a planned urban park (similar to Central Park in New York City) near downtown Raleigh, North Carolina (USA) was overturned by Republican legislators so that the tax revenue potential could be better utilized. The land had previously been the site of a hospital for the mentally ill, and is one of the largest tracks of undeveloped land in a city in the eastern United States. There was no discussion about the mental and physical health benefits this park would provide to the millions of people in the region, which is one of the fastest growing in the United States.

It is imperative that we incorporate nature into our urban planning. Otherwise, cases of mental illness and violence that seemingly permeate our society, will continue to escalate.

I just finished reading the recently published book “Your Brain on Nature: the science of nature’s influence on your health, happiness, and vitality” by Alan Logan, ND and Eva Selhub, MD. The book reviews the latest scientific research on how immersion in nature impacts the health of the human brain. Research is cited from around the world, including recent work by neuroscientists, providing convincing evidence of the benefits of nature for brain health and overall well-being. Logan and Selhub provide expert insight about the necessity of restoring health and balance in a world that is heavily dependent on technology.

What sets this book apart is the depth and breadth of information shared. Research studies are discussed, and Selhub and Logan take the next step by providing suggestions for practical application. Another unique aspect of the book is the collaboration of professionals from the naturopathic and conventional medical communities. The combination of perspectives this offers is groundbreaking and refreshing.

Topics addressed in the book include how nature impacts cognition; the specific elements of nature that influence the brain; the practices of shinrin yoku and forest medicine, specifically the cutting edge research by Dr. Qing Li and associates of Nippon Medical School in Japan; how green exercise benefits brain health; horticultural and wilderness therapies; the importance of contact with animals for health; nutrition and brain health; and the healing power of nature and ecotherapy.

I highly recommend Your Brain on Nature. It provides a strong argument that nature offers significant physical, mental and social health benefits to humans. Based on scientific evidence from around the world, it is the most complete resource on this topic I’ve found, and I plan to use it in all of my classes and seminars. Your Brain on Nature would also be a valuable tool for healthcare providers who want to incorporate nature into their practice, as well as anyone who wishes to improve their own health.

Selhub, E., & Logan, A. (2012). Your Brain on Nature: the science of nature’s influence on your health, happiness, and vitality.  Mississauga: Wiley.